The watch icon is very confusing. I think everybody agrees because the icon is associated to a status - but it is an action in fact. So people are not sure if you click do you watch or stop watching.

So we need to find either:


There are actually two aspects of the design for those icons, which are somewhat independant of one another: Interaction Design and Graphical Design. They are discussed below.


The main issue here is:


I (alain_desilets) feel pretty confident about the following answers (especially the first of the two):


The reason I am confident in those answers are that:


I suggest we vote on this proposal here:

Do you agree with that proposal:


The other aspect, is what the icons should actually look like. The graphical design itself splits in three considerations.

What should be the basic metaphor used for the icons. An eye, a surveillance camera, a Bell, eyeglasses, ML: it could be an envelope to convey that an email alert will be sent...
?

Please vote on your choices:


How should this basic metaphor be modified to generate the two icons:


Here are some variants that are based on the eye icon with state annotation in the bottom right.

Here is a variant with the open/closed eye (note that the idea of a closed eye was suggested by many of the subjects in Alain's usability test):

So whole zone would be clickable to set/unset. If we get fancy, it could be an AJAX refresh.

I think this will help a lot. Can we do now?

Rick wrote: "Can't we reuse the same implementation that the File Gallery has? When you list galleries, the Action icon is a pop-up/droplist menu."

Not sure about this one. I get a lot of complains as well. If it is
next to something like an edit button, then it makes sense that it is
an action (but there are a lot of people who prefer it as status). I
suggest that we use a combination icon where both the eye,and the
"cancel" eye is seen side by side, and there is a highlighted green
box around the current status.

or an eye with a radio button:

just some quick thought about it

As I suggested earlier, I think a simple combo/droplist is the way to go:


(rick)
Yes, it is a binary state, but we're trying to do 2 different things:


Good point about the gray icon. How about:


The only (major?) drawback I see is that this is directly opposite of the current usage.
Additionally, the dropbox could be used to also hold the category watch buttons.

Here is my suggestion.

I beleive that this icon should be unique and not generic like eveyone is trying to make it look like. We should think outside the box for this problem.

I've drawned samples of what this "unique" icon should or could look like:

Please remember that this icon is probably the one that is most clicked on when a user starts using TikiWiki. It's not about re-inventing the wheel, it's about making users understand that this "click to monitor" buton icon is unique to Tiki (even if it may not!)

(rick): Of course, instead of all these icons and buttons, we could simply move the WATCH stuff to the wiki action bar (i.e., at the bottom of the page) and simply use a text button Watch Page or Stop Watching Page.

I, for one, have never fully under stood why:

How it's done in other sites or applications


They don't use icons for watches. Instead, it's just a textual label "Watch" / "Unwatch".

Here is how it's done in Skype (focus on the green checkmark in the lower left corner). 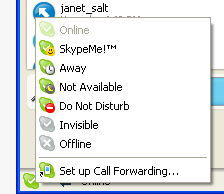 
(rick)
This seems identical to my drop-list proposal. The icon represents current status, with the items in the drop list representing possible actions.

Here is an example of how it's done in Yahoo(focus on the happy face at the top). 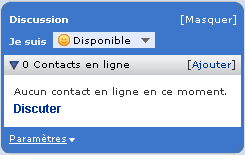 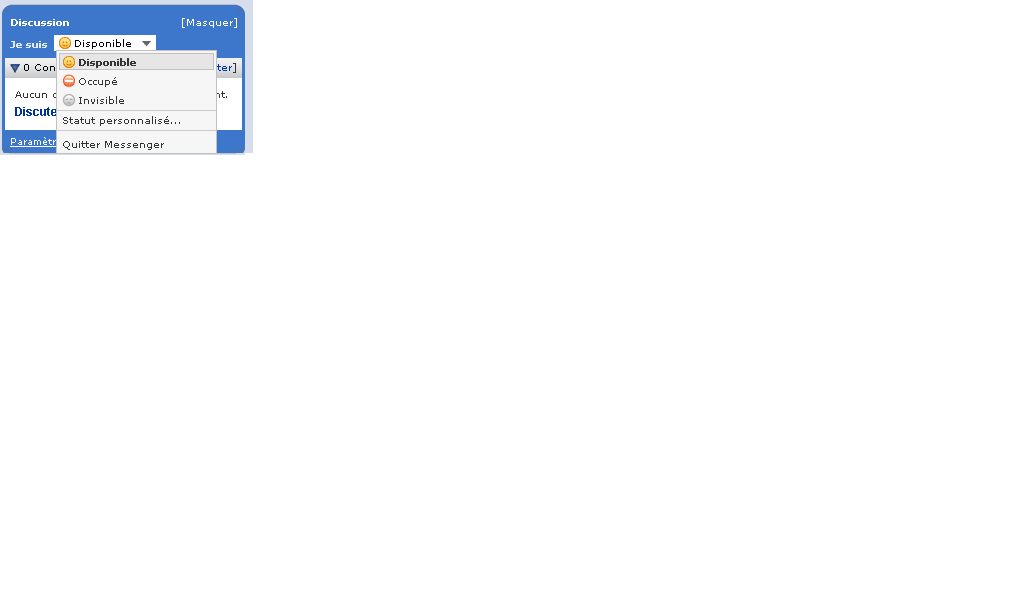 This one is interesting, because on the same toolbar, it mixes several status icons (ex: shuffle icon) which are state based, with one (the play button) which is action based.

This may sound like a bad design, but it's consistent with something I read, which said that, if the system already gives you clear cues of its state, then you should have the icon indicate the action. In the case of the play button, you know that the system is in a play state, because you see the video moving or your hear the song play. So that icon is action based. But for the shuffle mode, you don't know the state until the end of the current track. So that one is status based.

ML: on a toolbar, it's more obvious to see what is active or not because you have something to compare with. Our watch icon could be alone or next to the print icon...

AD: Marc, you mean that if all you see is an eye with a border around it, you can't tell that it's selected, because there are not other borderless icons to tell you that with a border is "special"? I think that's a good point. But what are the chances that the watch icon will be all by iself?

ML: not that much. Most of the time, it's watch and edit, and perhaps print.

Careful not to reinvent the wheel


I (Alain Désilets) think we should be careful not to reinvent the wheel. Instead, we should look at how this issue of state/action icons is addressed in mainstream sites and products. See the How it's done in other sites section for an analysis of Yahoo,
GoogleDocs, Skype, Windows Media Player and MS Word.

As far as I know, none of the people involved in this discussion (including me) are specialised in UI design, so we should not kid ourselves and think that our own pet solutions to this issues will be better than what trained UI specialists have chosen to use at Yahoo, Google, Skype or Microsoft. For sure, when we are faced with a UI issue that is unique to Tiki, we should not be afraid to innovate and invent our own solutions, but this is not the case here.

When I look at the the How it's done in other sites section, I see some clear common trends.

Trend1: When an icon can only be used to change a state (ex: spell-checker on/off, user online/busy/away), then the icon displayed in the toolbar always represents the current state, NOT the state you will end up in when you click on the icon. (Note: in case where clicking on an icon opens a popup menu, the icons in the popup then represent the state you will end up with. But the icon that you clicked to open the popup still represented the state in which the application was when you clicked on the button).

Trend2: In all cases where the icon represents a binary state, the UI conveys everything it needs to convey within the space of a single icon. No need for checkbox-icon combo, or two icons side by side, or radio buttons-icon combos.

Trend3: When the icon is binary, i.e. it can have only two states, then a single icon is displayed in one of two variants. The two variants are very similar, except that the "on/active/selected" variant is made to look "highlighted", by surrounding it with a black outline and/or, making its colours more "vibrant", and/or having a slightly different background colour.

Trend4: When the icon can have more than 2 states, the most common solution is to display a single icon whose appearance varies with the state. The different variants are either completely different from one another (ex: smiley face versus do not enter sign), or are almost the same, except for a small annotation in the lower right corner (ex: green checkmark, a red X, etc). When you click on the icon, a popup menu is opened listing all possible states. This solution is used in Skype and Yahoo for the user's online state. A less common situation for the N>2 state situation, is to have completely different icons displayed side by side, where the active one is highlighted (again, by surrounding it with a black outline, and/or making its colours more "vibrant", and/or having a slightly different background colour). You can see this in the GoogleDocs example, for the alignment style. Note however that this last approach is never used when the icon has only 2 states.

Based on the above, I say that for the watches, we should go for the solution described in Trend3, because we are dealing with a binary state. If we come across non-binary states in tiki, then I would go either one of the solutiions described in Trend4 (I prefer the popup menu myself, cause it takes less real-estate).

If I have failed to convince you that we should stick to a convention that is already used by other mainstream products, and if you insist on creating our own idiosyncratic UI convention, then my choice would be the eye-and-checkbox combo proposed by Marc. It seems to be the clearest among all the non-standard solutions that have been proposed here. But this is a distant second choice for me, and i still think it would be a mistake to do it.

Consolidation of icons for different kinds of watches


Rick propose that we could consolidate different types of watches in a single icon.

In the first sample I am currently watching the page via:

In the second sample I am currently watching the page via:

In the third sample I am not watching the page.

The use of check boxes with droplists is a very common UI technique. For example, FF uses it to toggle the Status Bar (View > Status Bar) on and off. 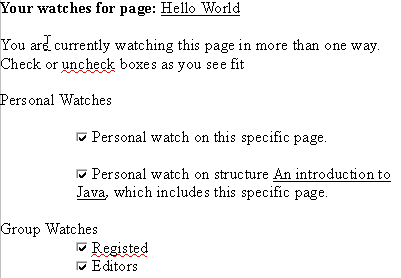 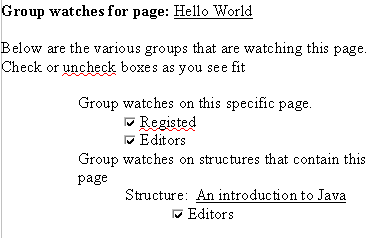